John Kennedy, one of the forefathers of modern advertising, was born in Canada and worked there as a freelance copywriter until 1904, when he landed a job at the Chicago office of Lord & Thomas. He was hired by Albert Lasker, then a junior manager, on the strength of a note Kennedy sent him, which read, "I can tell you what advertising is." Kennedy made good on that promise; although he stayed there for little more than two years, Lord and Thomas' sales volume went from $2.5 million to $3.2 million by the time he left the company.

Kennedy went on to hold copywriting jobs at other firms, but his greatest successes were accomplished while freelancing for such firms as Ethridge-Kennedy Company and Lord and Thomas. B.F. Goodrich tires made him a rich man by paying him $20,000 a year to work half time, an amazing amount for the era.

Kennedy's made two substantial contributions to advertising: defining advertising as "salesmanship in print" and creating "reason-why" copy. Stephen Fox, in The Mirror Makers, notes that unlike most advertisers of the day, Kennedy viewed the ideal ad as a "rational, unadorned instrument of selling" that did not have to be "charming or amusing or necessarily pleasing to the eye." Kennedy believed in the essential intelligence of the consumer and distilled his copywriting method into The Book of Advertising Texts. His methods influenced such famous copywriters as Rosser Reeves and Claude C. Hopkins. Fox later wrote that Kennedy's style was "the foundation stone of successful advertising."

It was 6pm on a May evening in 1905 when Kennedy, then a relatively unknown copywriter, sent a note to A.L. Thomas, the head of the Lord & Thomas advertising agency.

That note would have ended up in the trash if Albert Lasker, the firm's junior partner, had not been in the office. Unknown to Kennedy, Lasker had been searching for the answer to that question for 7 years.

Lasker, starving for the answer, quickly summoned Kennedy to his office. What Kennedy told him that night was simple. Just three words that ultimately changed advertising forever:

This concept was so basic and so effective that no one has since been able to improve upon it since. (Of course, it has evolved to "Salesmanship in print, on the air, or online.")

After that historic meeting with Lasker, Kennedy was hired by Lord & Thomas and became the highest paid copywriter in all of advertising.

Lasker commissioned Kennedy to write the breakthrough principles into a series of lessons. They were eventually all compiled into a book called "The Book of Advertising Tests". And it was used to train Lasker and the Lord & Thomas copywriters.

In addition to "Salesmanship-In-Print", Kennedy taught another new basic concept: Reason-Why Advertising. You must give prospects a reason why people should want your product or service.

Kennedy also showed how to know effective copy and how to test copy.

Soon, Lord & Thomas became the training center of the advertising world. Their copywriters were so good that other agencies began luring them away with high salaries.

Thus, the principles of Salesmanship-In-Print spread throughout the advertising world. And many started their own agencies, like John Orr Young who co-founded Young & Rubicam.

In 1907, Kennedy left Lord & Thomas to become a principal in Ethridge-Kennedy Co. in New York and to pursue a number of other jobs. In 1911, Kennedy returned to Lord & Thomas and freelanced his services for a short period of time. He became wealthy by freelancing for B.F. Goodrich tires who paid him $20,000 a year.

In 1912, "The Book of Advertising Tests" was re-published with a new, more appropriate title: "Reason-Why Advertising". (However two chapters were removed: a non-instructive chapter listing Lord & Thomas' data of results, and a chapter that basically says that good copy is just measured by how much it sells.)

In 1914, Kennedy was paid $25,000 to write a report to a group of publishers on what could be done to improve advertising. This report was called "Intensive Advertising".

Kennedy died at the age of 64 on January 8, 1928. And although his advertising career was short, he made a tremendous impact in advertising with just three words. 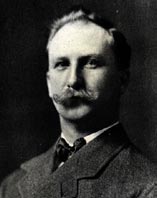 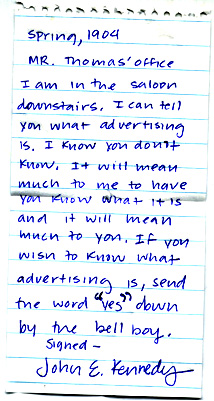