Phil Dusenberry is often cited as the person most responsible for turning BBDO into the creative powerhouse it is today. In recognition of his accomplishments, he has been repeatedly honored by the advertising industry, including being named one of the "Top 100 Advertising People" of the past century by Advertising Age.

As an influential creative, Dusenberry spoke to emotion as well as intellect, through theme lines like GE's "We bring good things to life" and campaigns for Pepsi, Pizza Hut and many more. He elevated advertising into a form of entertainment with a commitment to emotion, humanity and unwavering energy and verve. His long list of awards includes ADDYs, Clios, One Show Pencils, Gold Lions at Cannes and more.

Beginning as a copywriter at BBDO in 1962, he rose up the ranks to chief creative officer, then to chairman and CEO of BBDO New York and finally chairman of BBDO North America. His leadership saw unprecedented growth in the agency with the addition of renowned brands such as Visa, FedEx, HBO and Pizza Hut. The agency has been recognized with numerous awards, including being selected "Agency of the Year" in 1993 by both Advertising Age and ADWEEK, and "Global Agency Network of the Year" by Advertising Age and Ad Age Global in both 2000 and 2001. This success is underscored by Dusenberry's commitment to creativity and "The work, the work, the work," which became BBDO's mantra. As a boss, he was well known as a mentor and source of inspiration, urging young talent to go beyond what they thought they could accomplish to create work they could be especially proud of. Not surprisingly, creativity became the focus of his agenda as chairman of the American Association of Advertising Agencies in 2001.

His contributions to the betterment of society are unending. He headed the team that created the public-service campaign, "The New York Miracle," aimed to rally the spirit of New York after the attacks on September 11. He spearheaded the Advertising Council's campaign for freedom and their Freedom Corps campaign urging volunteerism. He is an active member of the STAR Foundation, on the board of the NY Coalition for the Homeless and the Silver Shield Foundation of NY, and was named to the board for Mayor Giuliani's Twin Tower Fund. He is also well-known for his key contributions on "The Tuesday Team," whose advertising helped get Ronald Reagan re-elected in 1984.

This creativity and brilliance extend beyond the advertising industry in many ways. Perhaps most notably, Dusenberry was the co-author of the screenplay for the Robert Redford movie The Natural.

In 2005, Dusenberry shared anecdotes and lessons from his career in the engaging and instructive memoir Then We Set His Hair on Fire: Insights and Accidents from a Hall of Fame Career in Advertising.

Dusenberry was born in Brooklyn, New York City in 1936, and attended Emory & Henry College in Virginia. He gained his first experience in advertising when he was working as a radio announcer, and was asked to fill in for the station's usual ad copywriter. He joined the New York advertising agency BBDO in 1962 as a junior copywriter, and in 1980 he became the agency's executive creative director. When he retired in 2002, he was Chairman of BBDO North America.[1]

Dusenberry was well-known for his work with one of his major clients, the soft drink giant Pepsi. He devised the advertising slogan "The Choice of a New Generation", and was instrumental in casting celebrities in Pepsi's high-profile advertisements, including Lionel Richie, Don Johnson, Madonna and Michael J. Fox. Dusenberry was overseeing the production of an infamous Pepsi commercial starring Michael Jackson in which Jackson's hair accidentally caught fire when a smoke effect misfired. Dusenberry referred to the incident in the title of his 2005 book, Then We Set His Hair on Fire: Insights and Accidents from a Hall of Fame Career in Advertising (ISBN 1591840821).

Dusenberry also dabbled in the film business, writing the script for the baseball movie The Natural which starred Robert Redford.

In 1984, Dusenberry wrote and directed documentaries for then President Ronald Reagan and First Lady Nancy Reagan. The films aired on national television and used the line 'It's Morning Again in America'.

In 2002, he retired as chairman of BBDO, and was inducted into the American Advertising Federation Hall of Fame.

Philip B. Dusenberry, the advertising executive who oversaw the 1980s Pepsi commercial in which Michael Jackson's hair was accidentally set on fire, died on Saturday at his home in Manhattan. He was 71.

The cause of his death was lung cancer, for which he had received treatment for a year, according to Roy Elvove, a spokesman for the advertising firm BBDO.

Mr. Dusenberry oversaw the teams at BBDO, an ad agency in the Omnicom Group, that coined famous taglines like "The choice of a new generation" for Pepsi, "We bring good things to life" for General Electric and "It's everywhere you want to be" for Visa.

"I'm always going to be searching for emotion," Mr. Dusenberry said in an interview with The New York Times in 1986. "In an age when most products aren't very different, the difference is often in the way people feel about the product."

In one Pepsi commercial that attracted national attention in 1985, Geraldine A. Ferraro, the 1984 Democratic nominee for vice president, sat with her two daughters and talked about life.

"There's one choice I'll never regret," Ms. Ferraro told them. "Being a mother."

Most recently, Mr. Dusenberry worked as a volunteer on a team that created the "Generous Nation" public service announcement that featured the line, "Don't almost give. Give."

Philip Bernard Dusenberry was born on April 28, 1936, in Brooklyn, the eldest child of a cab driver. He attended Emory & Henry College, in Virginia, on a baseball scholarship, but he dropped out after the athletic program and his scholarship were discontinued.

After taking voice lessons to try to lose his Brooklyn accent, Mr. Dusenberry worked as a radio disc jockey. He got his first taste of writing for commercials when the station manager asked him to fill in for the ad writer.

Mr. Dusenberry followed a radio colleague to BBDO, which was then called Batten, Barton, Durstine & Osborn. One of his early commercials for Gillette Right Guard is still remembered as a standout spot in the 1960s. It featured two men chatting through a bathroom medicine chest.

Mr. Dusenberry rose to prominence at BBDO in the 1980s, when he was executive creative director. The advertising industry began a wave of consolidations during those years, and many advertising executives were afraid that the trend might hurt creativity. Mr. Dusenberry, on the other hand, publicly supported the idea of mergers. "Bigness is not an enemy," he told The Times in 1986.

Mr. Dusenberry was an early advocate of using cinematic techniques and special effects in TV spots, and he often cast celebrities in ads. PepsiCo was one of his longtime clients, and the ads starred celebrities like Lionel Richie, Don Johnson, Madonna and Michael J. Fox.

Mr. Jackson was sent to the hospital in 1984 while taping a Pepsi commercial, after special effects meant to produce smoke accidentally exploded. In one negotiation with Mr. Jackson for a Pepsi ad, Mr. Dusenberry demanded that the singer not wear sunglasses in the spot, according to Mr. Dusenberry's memoir, "One Great Insight Is Worth a Thousand Good Ideas," which was originally called "Then We Set His Hair on Fire."

His ads were known for their compelling story lines.

"He does the sort of commercials that you call your wife and kids in from the other room to watch by saying, ‘It's on again,'" said John F. Bergin, the vice chairman of McCann-Erickson Worldwide, told The Times in 1986. "He simply comes up with magic."

Mr. Dusenberry's focus on advertising as entertainment was prescient of future shifts in advertising. Today, many advertising agencies promote advertainment, commercials that are entertaining in their own right and are sought out by consumers rather than avoided.

Mr. Dusenberry also dabbled in the film business. He was a co-author of the screenplay for the movies "Hail to the Chief," a 1973 political satire, and "The Natural," starring Robert Redford. President Ronald Reagan hired him to work on his campaign commercials and the film that introduced Mr. Reagan at the Republican National Convention in 1984.

After the Sept. 11, 2001, attacks in New York, Mr. Dusenberry led the team that made "The New York Miracle" public service campaign to lift the spirits of New Yorkers. And, in 2002, he oversaw the work of several agencies that designed ads to support President Bush's USA Freedom Corps campaign, which encouraged Americans to volunteer.

When Mr. Dusenberry retired in 2002, he was chairman of BBDO North America. BBDO's New York office more than doubled its billings under his leadership and won hundreds of awards.

Mr. Dusenberry is survived by his wife, Susan; a stepson, Ben Procter; a daughter-in-law, Ilana Sparrow; a brother, Harry, and his wife, Marcy; a brother, Joseph; a sister, Jean Driscoll, and her husband, Jack. 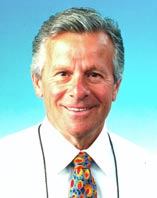