Sir Martin Sorrell (born 14 February 1945, London, England) is an English businessman and currently the chief executive officer of WPP Group. He has served in that role since he started the company.

Born in London to a Jewish family, Sorrell was educated at HaberdashersÂ´ AskeÂ´s BoysÂ´ School then ChristÂ´s College, Cambridge, and has an MBA from Harvard University.

He joined Glendinning Associates, and James Gulliver and then worked for sports agent Mark McCormack. He joined Saatchi & Saatchi in 1975, and was group finance director from 1977 until 1984. Often referred to as "the third brother", he designed and carried out SaatchiÂ´s then legendary agency acquisitions. Sorrell undertook this by refining the practice of the ‘earn-outÂ´.

In 1985, Sorrell privately invested in Wire Plastic Products, a British wire shopping basket manufacturer, and joined it full-time as Chief Executive in 1986. He began to acquire "below-the-line" advertising-related companies, purchasing 18 in three years, including in 1987 when he stunned the agency world with a $566 million "hostile" takeover of J. Walter Thompson. Sorrell followed this in 1989 with another dramatic hostile $825 million buy of Ogilvy and Mather. Since 2000, WPP has also acquired two more integrated, global agency networks, Young & Rubicam Brands and Grey.

WPP is regarded as the driving force for the period of consolidation which has been going on within the communications industry for the last ten - fifteen years. His WPP group has amassed the largest media buying group in the world, GroupM. Together with the creative agency networks, JWT, Ogilvy and Mather, Young & Rubicam and Grey, WPP is one of the three major players in the global advertising market.

WPPÂ´s stock price soared and although the company then went through difficult times, during which it was on the verge of collapse, SorrellÂ´s determination and business acumen brought it around.

WPP has become one of the worldÂ´s leading communications services and advertising companies valued by the UK stockmarket at £5 billion. With billings of £37 billion and revenues of £7.5 billion, WPPÂ´s operating companies provide national, multi-national and global clients with advertising, media investment management, information and consultancy, public relations and public affairs, branding and identity, healthcare communications, direct, digital, promotion and relationship marketing, and specialist communications services. WPP employs 140,000 people in 2,400 offices in 107 countries. He owns a substantial stake in the company through a series of pay awards and his own purchases of shares. Until recently he had never before sold shares in the company; his shares are worth around £70 million.

Sorrell himself is widely respected throughout the advertising industry, with his words being scrutinised and quoted by many within the marketing sector. Many industry observers credit him with the fact that the UK still has an independent, vibrant communications industry. His famed remark that the advertising recession in the early part of this decade was "bath shaped" was one of the most repeated quotes in the 2003 - 2004 period.

On November 18, 2008, WPP technically re-incorporated itself as offshore entity in Jersey (Jersey is considered as a fiscal paradise by the OECD) in order to reduce an annual tax bill of more than £200million.

In 2003, after 33 years of marriage Sir Martin Sorrell split from his wife Sandra. Lady Sorrell was awarded £23million in cash, a Georgian townhouse, £2 million of bank deposits and two parking slots at Harrods (worth nearly £200,000).

In 1997, he was appointed an Ambassador for British Business by the Foreign and Commonwealth Office and subsequently appointed to the OfficeÂ´s Panel 2000 aimed at rebranding Britain abroad. In 1999 he was appointed by the Secretary of State for Education and Employment to serve on the Council for Excellence in Management and Leadership.

In 2005 Sorrell sold £9m of shares in WPP at the end of a restricted stock holding period. He also agreed to change a contract with the company which had been much criticised by institutional shareholders in WPP as being unfairly written in SorrellÂ´s favour. Under the previous agreement if Sorrell had been terminated, it would have led to a very large payout; the new agreement provides him instead with no termination payment.

In 2005 his pay was £2.42 million including cash and bonuses. Further he exercised £52 million in share options, is entitled to a further £5.8million in stock, and deferred further options on another 2.65 million shares valued at £15 million until 2008.

Shareholders have criticised aspects of corporate governance at WPP. This came to the fore again in 2006 with the advent of two court cases revolving around alleged corruption in an Italian subsidiary and contract disputes with the US launch of the OK! magazine.

In June 2008 WPP drew strong criticism for the involvement of an agency, Imago, in which WPPÂ´s Y&R subsidiary held a minority interest, with the ZANU-PF presidential campaign in Zimbabwe. A report by the Financial Times found out that Imago was employed by Robert MugabeÂ´s campaign for reelection to the presidency of Zimbabwe. WPP subsequently divested Y&RÂ´s minority interests in Zimbabwe.

He was knighted at the New Year Honours 2000 Orders, decorations, and medals of the United Kingdom.

Sorrell is married to Cristiana Falcone, Media & Entertainment Industries Director at the World Economic Forum. He has 3 sons and 5 grandchildren. 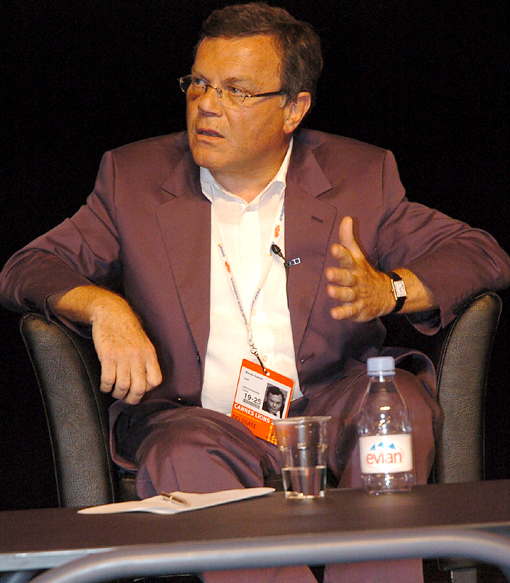