Theodore MacManus' distinguished services to the automotive industry throughout its early years were a potent factor in its growth into the greatest mass production industry in the world. His advertising and publicity programs were integral to the success of Cadillac, Chrysler, Dodge, Fisher Body, Packard and almost every other automotive leader of his time.

MacManus was the author of perhaps one of the greatest advertisements and most inspiring pieces of business literature ever written. "The Penalty of Leadership," written for Cadillac, appeared only once on January 2, 1915, in The Saturday Evening Post. However, its impact on the advertising industry has been long lasting, shining as an example of powerful and persuasive copy.

His insistence upon fine craftsmanship reflected itself in art, layout and typography as well as in his writing. His work linked product and maker inseparably in the public mind, combining sales appeal with believability and strength with restraint. MacManus also believed that advertisements helped to define the goals and nature of the manufacturer. He said, "The big point is that the root idea or principle expressed in the advertising not only influences and guides the public but actually becomes the all-controlling policy of the advertiser and his organization."

In addition to his work with the automotive industry, MacManus wrote two inspiring books called The Sword Arm of Business (1927) and Men, Money and Motors (1929).

His firm allegiance to truth in advertising was based upon the belief that its is both intrinsically good and important for business.

His example of work and achievement continues to inspire advertising professionals. As MacManus acknowledged in the concluding phrase of his advertising masterpiece, "That which is good or great makes itself known, no matter how loud the clamor of denial. That which deserves to live - lives."

Born in Buffalo, New York. Started as office boy at fifteen. Became city editor of a newspaper at sixteen; managing editor at nineteen. He then became advertising manager of a department store, determined to learn the feared and hated intricacies of business. About to sign a contract a few years later for a large honorarium, he asked to be released, saying he felt sure his usefulness was declining, though it seemed to be at its fullest. Borrowing $500, he opened an office and went into the advertising business. In 1917 was offered retainer in six figures to divide his time between Chicago and Detroit, which he refused. In 1919 offered another six-figure guarantee per year for three years for handling one advertising account. Declined, because it involved giving up account with which he had lived from its inception.

Became long ago acknowledged as leader of one of the two schools of American advertising. 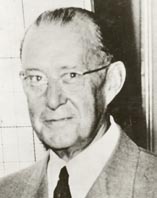